Yep, I pulled her down just because I can pretty much. That, and the bike's about ready for the road. Just a few more details to work out, then off to get her running. Enjoy. 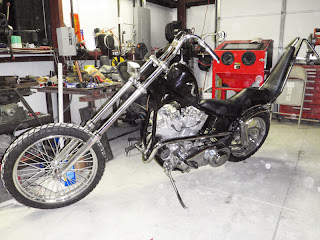 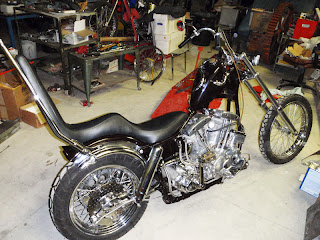 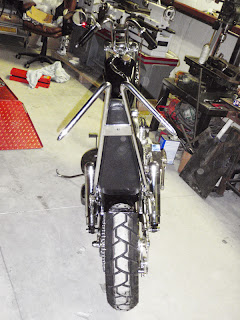 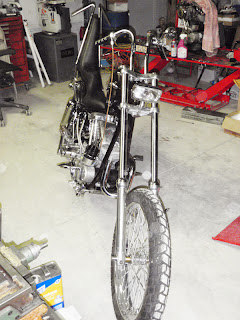 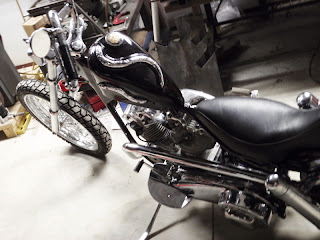 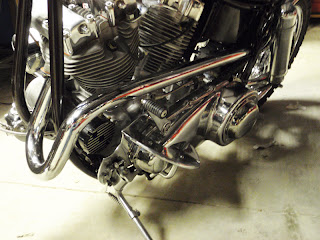 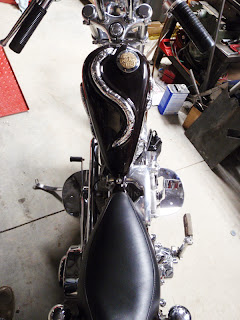 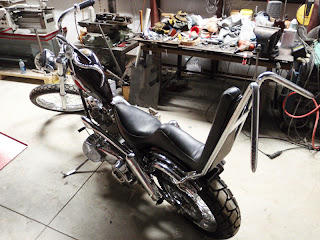 You still here? Why haven't you started checking out the new EC / Battlesteed site? I don't even come here anymore! Well, not often anyhow. Go on over to eternalcombustion.com and look at all the new bikes and stuff. I even update it from time to time. Like yesterday, when I put up some new '66 shovel build stuff in the blog. Go on, you know you wanna! Here's a peek... 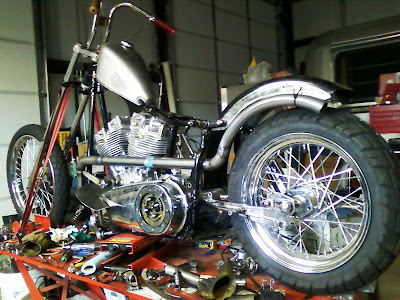 The Store is Dead! Long Live the Store!

That's right, the new website is up and running and ready to be gawked at. Head on over and take a look.

The store only has a meager two shirts in it right now, as I goof around with all the new shop settings, but feel free to bug me if you don't see what you want on there in the next few days.

The old site logs are dead and buried, so if you were an old customer who already had a login, you'll need to create a new one. Sucks, but I ran out of patience trying to transfer everything over.

The new site also has the blog integrated right into it, so this page will be going away and I'll just leave a link to the new blog here after a while.

Hope you dig it and look forward to seeing you guys out there once the sun warms this rock up a little bit!
Posted by Craze! at 6:25 PM No comments:

Hey gang, the EC store will be going through some updates over the next week, and included in that process will undoubtedly be some "blackout" time where the store will be completely offline. Don't freak, we'll be back before you know it.

There will be a lot of changes, including fewer products up for sale as we close out some of the things you're used to seeing. If there's something you've been wavering on buying, give us a shout and we'll see if there are any left.

We're all sold out of Troop helmets, headlights, sporty seats and a few other small parts, but most of the other stuff is still lying around in ones and twos. After all the parts are gone, they are gone for good. We'll be focusing on our own hand-built parts and pieces along with EC and Battlesteed schwag like shirts, hats and the like, and of course the bikes coming out of the shop!

Big year, big changes, and all for the better. Hopefully we get some time on the road soon and can suck down an adult beverage with you guys along the way. Thanks for all the support over the years, and here's to keeping it going for many more!

What the Hell is Battlesteed???


I've been threatening to let everyone know what's up with the new "Battlesteed" thing that's turning up here and there, so here goes. Grab your favorite adult beverage and lend me an ear.

Over the last year, I've been having a sort of crisis with what to do with Eternal Combustion. For those that know me and the biz, you know that I'm a one man band. There have been some seriously good folks who've helped me along the way, and some seriously shitty ones that luckily dropped off the map early on, but all-in-all, it's just me. You see, EC was started with the idea to support those craftsmen across the country who might not be the best business folk. Take what they create and make it easier for them to do so and easier for them to make enough dough to keep doing it. Add in my own creations and go to town. Noble cause right?

Well, it didn't quite go as planned, and the store wound up being a great place for hard-to-find stuff from all over the place, but never really the communal sort of thing I'd hoped for. Just me buying and selling the parts and pieces that I felt were pretty cool, and having a pretty good time doing it. Thing is, it took all the time I had just to run the store, get to the shows, keep parts on the shelves and shipments on time. The "make stuff" part kinda flew right out the window with the store's success. If I complain about it though, kick me in the sack. It's been a great ride so far for sure.

That said, I decided last year to get back to the basics I had hoped to start from originally, and start making stuff again. I've always been a tinkerer. Can't leave shit well enough alone. I always have to break it and make it better or just different. In my life, that means bikes and parts. I started asking customers, friends and anyone who knew anything about what I was doing how to transition from a store to a shop, and they pretty much all said "create something new".

Great. I'm good at that. Sometimes. So I set out to make a decision and get going. The decision was to focus on my bike builds and custom parts that make that whole thing easier. Focus on getting a full-blown shop up and running and support the online store along the way. I took off for the middle of nowhere South Dakota, stopped hitting as many shows, and got kind of quiet on the "circuit" so to speak while I focused on getting set up. I just needed a name.

I was out with my buddy Sam Turner one morning for breakfast while rolling through Colorado, and a particular sticker on the back of his murdervan caught my attention. I'd seen it many times, and it always made me want to ask what it was for. It read "Battlesteed" in perfect death metal lettering. Sam's answer is that he had made up a few of them and that they were what he called his bicycle. You see, Sam is one of those crazy bike messengers that rides with no brakes or gears and just gets it done. That bike is his battle steed. The whole picture rang true and grabbed me. That's what I do. I make the bikes we go to war on the streets with. Real battle steeds for a modern age. Sam and I reached an agreement to let me use the name and hopefully have him do a ton of the art for the shop as we grow. Sam is also the resident artist for Dave Barker over at Speedmetal.

Now I'm hitting stride with the shop, and ready to get the new name up and running in the outside world. Bikes are coming off lifts for the first time, and Sumo's knuck marks the first runner to hit the streets. My own '66 is next along with a hoard of other war horses that hopefully will blow some minds and keep me going.

As for Eternal Combustion, it will always remain as the store I sell all the shop's creations through. It's part of me and always will be. I'll be reducing the amount of 3rd party parts I sell, and concentrate on the schwag and bits I make out of the shop from now on, but it'll be as alive as ever. I'll still hope to find good people out there who need help getting their creations out to the world and lend a hand where I can, but it's time to focus on what makes me tick - bashing metal, forcing it into shapes it may not like, and blasting it down the highways across our great country. Hope you get it, and hope to see you out there!

Thanks for all the support!
Craze